Why every startup should use games in their mobile marketing

This post is part of a series about how startups can use games to engage their target customers on mobile. We publish a new post in the series every Wednesday, so stay tuned. 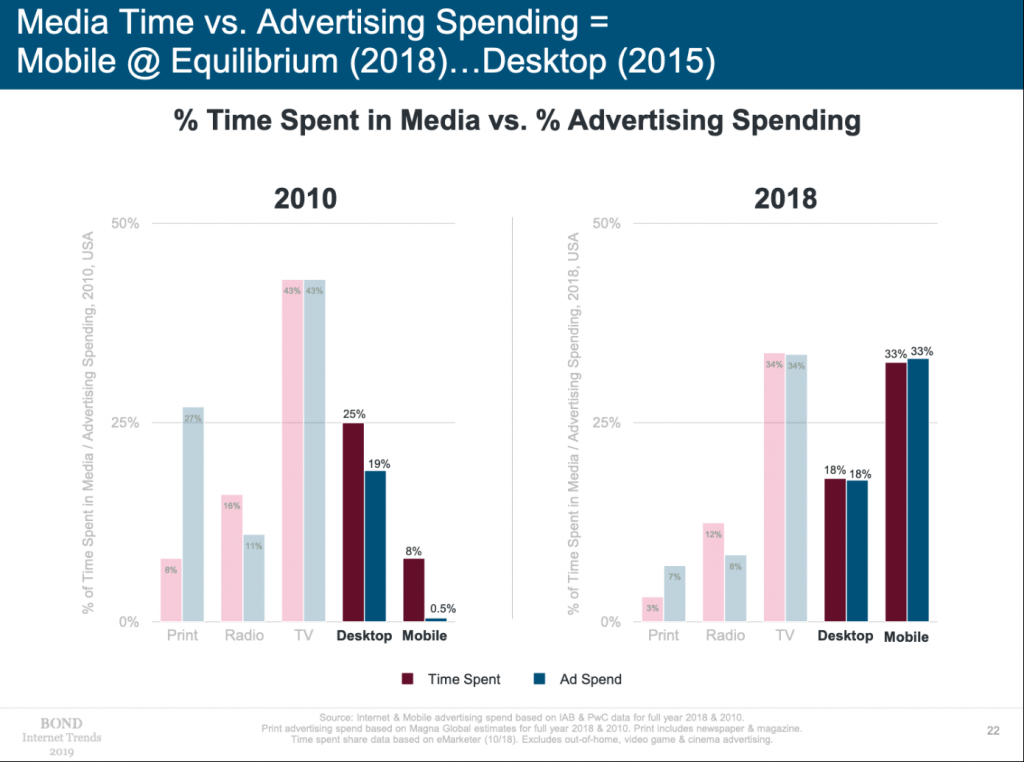 If you’ve spent any time thinking about your business’ marketing strategy over the past few months, you’ve probably seen this chart before. It comes from the 2019 version of Internet Trends, an influential presentation released annually by Mary Meeker, a partner at the Venture Capital firm KPCB. The chart compares the amount of time consumers spend on different media (print, TV, internet, etc.) with the percent of overall ad spending allocated to each medium.

The message of the chart is clear – advertisers were dramatically underspending on mobile in 2010. Consumers in the US have spent nearly 8% of their media time on mobile devices in 2010, but advertisers were still allocating only 0.5% of their total budgets to mobile advertising. In 2015, the figures were even more dramatic: nearly 25% media time on mobile vs. 8% ad spend. This represented a huge missed opportunity and there reason why Gamewheel was founded. By the end of 2018 the situation moved to an almost perfect equilibrium as expected.

There are a few reasons why this situation exists, one of which is inertia. Lots of large brands and ad agencies grew up in a world of print and television, developing sophisticated marketing operations designed to take advantage of these channels. It’s only in the past few years that they’ve fully embraced online, so it’s no surprise that the shift to mobile is taking time.

For a young startup launching in today’s mobile-first world, though, this isn’t really an excuse. If you’re trying to reach your target customers, you should be doing it where they spend their time. And that means you should be advertising on mobile.

Another major obstacle holding back the growth of mobile advertising is one that does affect startups. And that’s the fact that, as Steve Jobs once famously said, “most mobile advertising sucks.” When marketers first started advertising on mobile, they took formats that had been developed for the desktop world and shrunk them down to mobile-size proportions. As a result, most mobile ads are small, difficult to read and struggle to engage users’ attention. And with the rise of adblocking, many of those ads aren’t even being seen in the first place. Because of poor performance and concerns around viewability, advertisers are hesitant to invest money in mobile marketing, particularly their premium branding budgets.

As a startup with a limited marketing budget, this is an important issue to be aware of. You can’t afford to waste money on ineffective “wallpaper” advertising like mobile banners. So the question is, what sort of mobile marketing should you do?

A lot of work has been done in the past years to make mobile advertising better. One clear trend has been to make ads more interactive – by adding video, audio, transitions and other elements. These types of ads, which are called rich media, do a much better job of engaging viewers than static ads. Adform, for example, found that consumers are three times more likely to click on a rich media ad than a traditional banner ad.

So if you want to engage your target consumers on mobile in the most effective way possible, it’s clear that you should be running interactive ads. These days, the advertising industry is mainly focused on doing that via video. But why stop there? If you’re looking for something that’s highly interactive and has a proven ability to engage people’s attention on mobile, there’s no better medium than games. Emarketer estimates that 64% of smartphone users in the US already play mobile games, with NPD Group finding that mobile gamers spend an average of two hours per day playing games. From this perspective, there’s a perfect fit between what marketers need and what games can deliver.

That being said, having a game alone isn’t enough. You still need to deliver the game to your target users and make sure they convert after they finish playing. This is where good campaign design comes into play. We’ll go into the details of that next week and break down for you step-by-step how to get your ad game campaign up and running.