The average consumer sees up to 5,000 ad messages each day. In this environment, it’s crucial for brands to cut through the noise. One of the best ways to do this is by making interactive ads that include video, audio and other multimedia elements. These types of multimedia (“rich media”) ads do a much better job of engaging viewers than static banner ads.

When it comes to upping the engagement factor, most brands stop at video. But there’s another, even more interactive medium they can leverage – games. A growing number of major brands have already recognized this and started using ad games in their marketing campaigns. Below is a list of five of the best examples.

Ford used a penalty kicks game to promote one of its car models in Sweden. The campaign ran as a mobile web banner. When a user clicked the banner, the game expanded to full screen. Players needed to shoot three penalty kicks through the back door of the car. At the end of the game, they could watch a video and make an appointment to visit a local dealership. 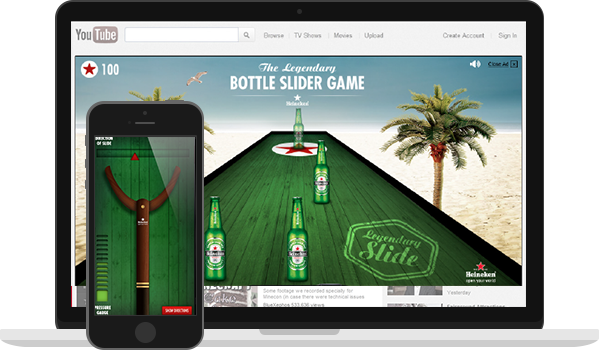 Heineken used a bottle slider game (i.e. shuffleboard) to promote its brand in Ireland. The campaign ran as a multi-screen online display ad. The bottles and target were shown on the primary screen, while players needed to use their smartphone to open up a separate webpage with the paddle. At the end of the game, players could watch a branded video.

Target used a jump ‘n run game to promote its holiday gift cards. The game ran as part of a rich media mobile display ad. Players could choose a custom avatar, gather collectibles, accumulate points and play multiple levels. At the end of the game, they could share the game with a friend on Facebook or purchase a gift card via a deep link to the Target website.

Tesco Bank used a pattern matching game to promote its Clubcard Credit Card. The game ran as part of a rich media online display ad. It was based on the classic game Simon, where players have to repeat an increasingly complex pattern. At the end of the game, players could watch a video and share their score on Twitter.

Cadbury used a quick reaction game to promote one of its product lines in the UK. The campaign ran as a Facebook mobile newsfeed ad. When a user clicked on the ad, the game expanded to full screen. Players needed to tap the obstacles before they fell to the bottom of the screen. At the end of the game, they could submit their score for a chance to win a prize.